One of the great perks of my work is that I get to test the equipment! As designer of the BOLT racquets, it's critical that I can get on the court myself and feel the performance of the racquets with my own hands. I've played tennis competitively and coached for over 40 years. My feel for the equipment has developed through many of the most important technological and design shifts in racquets and strings from my beginnings with wood, to steel and aluminum, then to carbon fiber with wood and then finally to carbon fiber by itself. In fact it was my first experience in the early 90s with a hollow carbon composite frame as it exists today that inspired me to develop the suspension design of the BOLT.

My hope is that players can identify their own games in the context of the information provided here in order to make the best racquet and string selections for themselves. In this session I'm looking for a polyester hybrid string set-up that fits best with my all-court game. I'm happy to hammer groundstrokes but I like to move forward to the net as well. Generally I hit with a medium to fast racquet head speed and consequently a great deal of spin so it makes sense for me to use some polyester in my string set-up. To generate maximum spin I should use 100% polyester but that provides far too little of the feel I grew up with, even in a BOLT. I prefer to have a softer string in combination with the poly to help with volleys and touch shots, and to add more pop on my serve as well. I still get plenty of spin with polyester mains in my BOLT so I'm not giving anything up with the hybrid in order to gain a familiar feel.

In my experience with various string types I've come to prefer the stiffness number as the best predictor of the feel of a polyester string. I will start there and then consider other factors such as spin and power potential, tension maintenance and durability in order to make a selection. The mechanical properties of the PLX suggest that it's stiffer than the ALU Power. On a scale of polyester string which ranges from the stiffest at 314 to the softest at 136, the PLX is 218 and the ALU Power is 209 (see string tool links below). The play-test did not confirm that for me. I thought the ALU Power played stiffer than the PLX, though it didn't feel stiffer. The PLX has a unique soft feel for a polyester which I believe is the objective of the product formulation. It's a good reminder of why it's so important for players to play-test equipment, particularly strings, before committing to long-term selections. The result of the stiffer performance of the ALU was more spin. It had a uniquely elastic quality in spite of its stiffness which translated into more dwell time for a terrific response. The subtle surface texture and matte finish of the PLX suggests it would grab the ball and provide extra spin but its slightly softer response made for less compression of the ball and therefore less spin. For volleys and touch shots I preferred the PLX, it felt more like a multi-filament at times. The superior spin and power potential of the ALU Power however made up for any deficiencies on volleys and feel.

The most noticeable difference between these two strings aside from color is the surface texture. To me it's a trait that informs the general performance of the strings significantly. The ALU has a smooth shiny surface in contrast to the matte finish and subtle texture on the PLX. It makes sense that the measurement of string-to-string friction is lower for the ALU and accordingly its measurement for potential string "snap-back" is higher. The texture of the PLX hints at its higher string-to-string friction measurement and that was confirmed in my experience of less string movement than the ALU. The PLX string-bed seemed to play as a bed of individual strings while the ALU had a less tactile quality and seemed to play more as a string surface. The tactile quality of the PLX was probably the reason it felt great on volleys and touch shots, and made for a good pocket, but the string surface quality of the ALU definitely compresses the ball more for a louder "pop" at ball impact and an awesome bite on the ball that shined on groundstrokes and serves.

Other qualities such as durability and tension maintenance are less important to me than stiffness and all around playability but they certainly are important considerations depending on the circumstances. I know players using polyester because "it doesn't break" and some using it for the massive spin potential or both. Of course the priorities of a player can vary greatly and it's important that each of us has some understanding of our own "best fit".

In a hybrid set-up as I'm testing here, durability of the polyester is not really an issue. Typically it's the softer string in a hybrid that breaks first so I'm less concerned with durability of the polyester than I am with tension maintenance. The PLX in my test seemed to remain at its optimum playing tension for longer than the ALU Power. After a break-in period the ALU Power was really sweet and the optimum tension held up well, but not as well as the PLX. The PLX is pre-stretched, as are many of the Kirschbaum polyesters, and it seemed that the optimum tension window was available immediately and then lasted a while longer (4-5 weeks) than the optimum window for the ALU (2-3 weeks). Being in the tennis business, I'm not too concerned with the tension maintenance. I have to re-string regularly anyway. If I can get 2-3 weeks of near optimum performance from a polyester I'm happy, but that certainly isn't best for everyone.

Both of these set-ups provided great spin and overall high-quality performance but my personal choice is the Luxilon ALU hybrid. If I were playing more doubles, PLX might be my preferred option. That being said, the ALU is twice the price of the PLX so if that's a high priority, PLX is a great option. Luxilon has built up quite a reputation since its debut due in part to its popularity on the pro tour. To me, it's very consistent and its predictable performance make it a great barometer by which to judge other polyester strings. No wonder it's the string of choice for Federer, Djokovic and many other top pros - they should play it in a BOLT, it feels even better!

Beware of "dead" polyester string: Players are frequently using polyester string because "it doesn't break" and consequently the string is played with for many weeks, sometimes months, past its playing life. Polyester strings are essentially pure plastic and hold tension far less long than most other conventional nylon and multi-filament strings. And unlike conventional strings which can remain elastic and resilient for many months past their prime, when a polyester string is past its prime it "ruptures" and fails. It becomes dead. It loses its resiliency completely and has no ability to rebound from impact. Pay attention, don't play with dead polyester. It's bad for the body.

Steel/Polyester String Hybrid In a BOLT 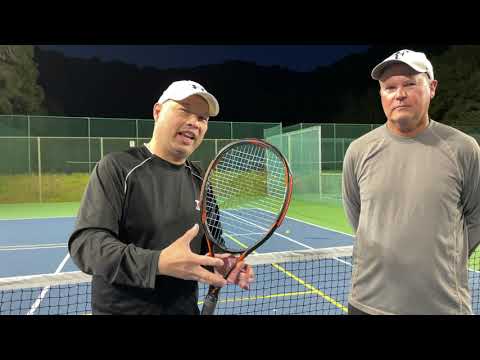